The Night Guardsman by Jesse Miksic 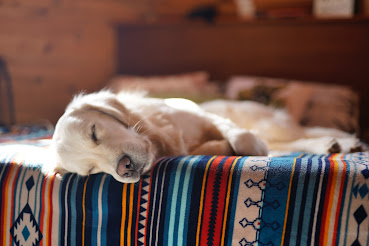 Autumn has called this
rugged child dog out of sleep
when the sun is still
just flexing her fingers.
He has been a restless sleeper lately,
two days ago he was
chasing something in his
doggy slumber, and
we didn’t wake him, because
who would do that, or
undo it, bind his little
wildness? But yesterday
it must have been a nightmare,
because he leapt suddenly
upright, growling, terrified
in our quiet bedroom but
furious to protect us from
his transient intruders.
He is a loyal boy, fully
dedicated to his life’s work –
to the vanquishing of all
the small noises at his
great noise, to the unbroken
light at the front window.
This will be his first autumn,
the first ever in the whole world
to a doggy, and thus, I guess,
his restlessness:
big paws in the leaves,
trusted teeth on dry wood,
cotton ball head,
tail like a plume he flies,
waking suddenly into triumph.
---
Jesse Miksic is a graphic designer and writer living in the suburbs of Philadelphia. He spends his life writing poetry, ruminating over philosophy and pop culture, and having adventures with his endlessly patient wife, two awesome children, and hyperactive dog.  Recent placements include Pink Plastic House, Moist Poetry, Selcouth Station Press, and Hearth & Coffin. His work and musings can be found at @miksimum on Twitter and Instagram, or www.miksimum.com