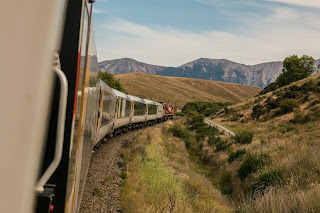 waits at the Hungarian border.
Listening, it hears a smörgåsbord of languages.
Cries in Magyar, Polski, Romani, Russkiy, and Ukrainska
among many, many others.
As its boy’s train pulls away it sighs as if deflating.
Accepting that it will never see him again.
Quarantined, despite possessing the appropriate papers.
The monkey waits.
Listening to passing children laugh.
Hearing gunshots and
answering with smiles.
Hearing screams but
trading in laughter.
The monkey has not forgotten its boy
but, it has a new job now.
Watching the future come and go.
Come and go
on trains that have been
coming and going
for years.
---
Ian Brunner is a writer from Buffalo, NY. He has most recently been published in Ghost City Press, Selcouth Station, and the Comics Cabinet, and is the author of the  chapbook: Ruminations published through the Cringe Worthy Poet's Collective. Along with this, he is the short fiction editor for Variety Pack Magazine and can be found at Twitter.Com/MadRadIan.